Give thanks to our great God for the rain in some areas across the State this last week! It has been a blessing, a source of encouragement for many. As you know though, this rain may or may not signal the beginning of the end of the drought and even if it does it will take many, many months or even years for farmers, families and communities to recover. Will you rejoice with them for this latest rain and continue to pray for them over the weeks and months to come?

Here is an update from some parts of New South Wales:

Gunnedah
Lyle Sims says, “The rain was very welcome. It ranged around 20mls near Gunnedah, and patchy areas of 4 mls and some of 35mls that I heard of near Tamworth. Useful, very useful, in the scene of people’s spirits, yes uplifting, praise the LORD for this at least. As far as other normal uses, no, it will need lots of these falls to make any significant difference, but there are no complaints, people are happy and thankful to receive anything.

Some people still hanging on to stock, though with smaller and smaller numbers. Some have sold everything. It is hard to have kept them alive for so long and then face the reality that hay is still an exorbitant price and sell. There is resignation, but also for some people a relief at having done ‘something’ and the cow price has risen a little so if the stock are in any reasonable condition after eating failed winter cereal crops people are able to get out of them and have some income flow at least from that. The worry for many of them is that they’ll not be able to afford them later if the drought ever does break. One Stock Carrier told me he’s now lost 35 of his clients that he used to cart cattle for as they no longer have any cattle at all! Cropping folk if they’ve had any growth of winter cereals (grown on the little remaining subsoil moisture that they may have from a very, very long fallow) have been able to turn a slight profit in just making their crops all into hay and selling it that way. Chick Peas that are still growing will look a little brighter with the rain, all the wheat, Barley, Oats, Canola, if anyone had any, has started to die and/or ripen rapidly now with the heat and wind.

Wind storms have been terrible. Even in the town, in the Church dust coating everything, ‘sandpaper’ on the seats and on the lectern, even on the mouse pad of the Church music computer though this is covered up! If it had not rained I think it would have been very worrying for everyone. The worry is still there, but the sight and sound of rain, even a small amount has a wonderful way of giving people hope. God is still King!”

Narrabri
Sam Smith says, “We were fortunate to receive falls of approximately 20mm of rain around Narrabri. This has provided a lift in spirits for most people: it’s nice to see the dust washed off everything, even if it only lasts for a couple of days. The reality, however, is that this fall doesn’t begin to meet the need here. This rain has not penetrated more than a couple of centimetres into the soil, and so it will all evaporate in less than a week.

We have seen a severe decline in the general morale in our community over the past 3 months. Before that there was still hope that there would be some crops to harvest, but it is now clear that this season is another total failure. Our farmers are used to crop failures, and easily absorb one failed season. When they face two failures in a row things become very difficult indeed. In this area we are now facing the reality of three consecutive seasons with almost zero harvests. Businesses in town have closed, people have been forced to move away, and we are seeing more and more people seeking help just to put food on the table. There is a feeling across the community almost of despair, which we have not been seeing before.

Please pray that as we seek to serve those who are suffering hardship in our community they will see the love of Christ in us. Pray that they will not be satisfied with having their physical needs met, but that they have an even greater need which can only be met in Jesus. Pray that we can proclaim the love of God in this situation, and give people hope that the drought cannot extinguish.”

Manilla / Attunga
Give thanks for the 29mls of rain that fell at Attunga and good falls in Manilla. As Christine from Manilla Presbyterian Church says, “Any good rain is useful until the heat hits again and there’s no follow up rain.” Please pray for follow up rain.

Feeding of stock around Manilla is continuing if the farmers haven’t yet sold off their remaining stock (as some have done already) – when they do sell off their remaining stock it will be a two year recovery before any money is made once the drought breaks. Manilla Presbyterian Church continues to try to support their community because this drought affects everyone. Chris says, “Keep praying for its end after heaps of rain that is desperately needed for the country to recover.”

PIM
Gae McDonald says, “Praise God! The area has had a little rain. In our patrol area, the BOM shows that they received between 10mm and 94mm. Narrabri had 19mm. Bourke received 94mm and Brewarrina 50mm. This year to end of September Brewarrina’s recorded rainfall was less than 90mm which sometimes came down in ones and two mms so to get this much in one hit is brilliant but not drought breaking. All the non-sealed roads are closed so the stations will be celebrating at home, enjoying being stuck at the homestead, although they will be battling the mud to still feed the animals.

Please pray:
Thank the Lord for the rain He has provided. Answering many prayers and providing short term relief.
We pray for spiritual renewing and faith in the hope that can only be found in Jesus.
Please pray for follow up rain for the land and resilience for station folk by accepting God’s grace.
May all things be done to His will and purpose: for His glory.”

Glen Innes
Andrew Campbell asks, “Please pray for farmers in the usually reliable New England. We have had one-third of our usual rainfall for 2019. Many are short of stock and domestic water. Those feeding stock are exhausted with the same old every day; unsure of how long their funds will last; unsure of whether it is worth still feeding; unsure of where to source stockfeed; unsure of their stock water, unsure of whether it would be better to give up and re-stock later. So much depends on God’s Providence. Yet the farmers I know are positive, independent, and trusting God that there will be a break in the weather soon.” Thank God for the recent rain and pray that more will follow.

Gilgandra / Warren / Gulargambone
On the 27th Sep a group of 16 people from Ryde, North Sydney and Macquarie Chapel Presbyterian churches travelled out to Gilgandra in a bus kindly provided by the Scott’s College Bellvue Hill and visited the churches at Gilgandra, Warren and Gularbumbone. Thank God for how encouraging this trip was, for both those in Gilgandra, Warren and Gulargambone and for those who travelled from Sydney. Look out for the full story in our next Prayer Letter.

Jericho Road would love to send a generous gift to congregations in drought affected areas to allow them to share God’s love with those struggling this Christmas. If you’d like to be part of this you can make a donation here – please put Jericho Road Drought Appeal as the description for all online donations. 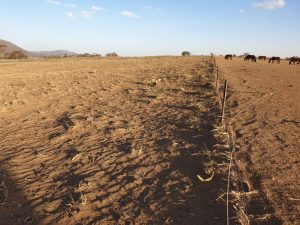