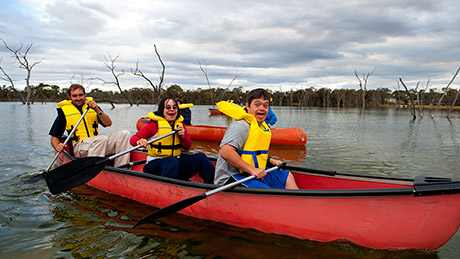 The Dreamhouse
The ABC’s real-life look into disabilities

I’ve been following the progress of an ABC documentary, ‘The Dreamhouse’. A raw and honest presentation about three people with intellectual disabilities learning to live independently. So far, the importance of giving people with disabilities opportunities and entrusting them with responsibilities has been shown. When this happens, people grow at amazing rates, and begin to function far above and beyond what is often presumed of them.

In the final episode, the importance of life experience was shown. The comment was made that it’s important for people with intellectual disabilities to have a variety of life experiences, otherwise they get stuck in their ways. When people go beyond their comfort zones, it gives them confidence to handle other situations. Seriously?? Isn’t that the same for anyone? In my work as Disability Advocate, I’ve been impressed by how much is similar between people with and without disabilities rather than how much is different. Come to think of it, it seems to be more confident people who are better at listening to my speech than reserved people. Something to ponder.

This increase in confidence could clearly be seen in peace-loving Sarah. Sarah didn’t get a whole lot of attention in my last blog, but she’s the centre of attention this time around. Sarah who is usually trying to avoid conflict and keeping the peace was now standing up for herself, and giving as much as the two men in the documentary. At one level, this increase in argumentativeness doesn’t seem to be a development to be welcomed. However, being able to assert one’s self is an important life skill. Especially when the label ‘disabled’ comes with a level of presumed passiveness.

Nonetheless, despite the house’s success, and the rapid growth of Sarah, Kirk, and Justin, someone went home. Amazingly, it wasn’t Kirk. He has come such a long way. To much relief, it wasn’t Justin. He has too much going for him to be tripped up by silly pranks and immaturity. Surprisingly, it was peace-loving, conservative (perhaps not so much now!) Sarah. Sarah’s mum felt the provision of support in the house was not sufficient for Sarah’s needs, and another option was required. Was this the call? I’m not in a position to say. But, this development raises an interesting question – if there’s a likelihood of failure, is there any point of trying in the first place? Especially, if we’re talking about disability inclusion in the church? What if the outcomes of our efforts fall short of our expectations? We may look like a failure!

It seems to me fear of failure is quite common, and I would suggest some people with disabilities live on a knife edge in this regard. Given that our culture commonly values a person according to their ability, the stakes are so much higher for someone with a disability. Should they succeed, they win more acceptability and any shortcomings are forgiven. Should they fail, not only do they not achieve their endeavour, but they are also confronted by all the prejudice and resistance that lurks just below the surface. And so does anyone who advocates for them. The person with a disability can easily end up in a reality where failure is not an option. I wonder if we can be resistant to including people with disabilities because we are so utterly fearful of failure?

I remember visiting and speaking at a church. When I met the senior minister, who had not met me before, I could feel the tension in the room rise instantly when he was confronted by disability. He was to interview me in two of the services, and I could tell he was thinking, “This is not going to work!” The tension remained throughout the first service. But the interview worked like I knew it would. So when the second service came around, the senior minister was a different man! He was so much more relaxed and cheerful, because he knew the interview was going to work. We are so fearful of failure and don’t regard it as an option.

‘The Dreamhouse’ showed that failure is an option, and it’s a good option. Sarah learned vital life skills she would not have learned otherwise – like using public transport unassisted. Sarah learned to be self-assertive, and grew as a person. While in some sense we may regard returning home as a ‘failure’, in many respects her experience in the house has been a huge success. Sarah now has a whole new set of life skills and experience that she can take into the next stage, whatever that may be, as she endeavours to achieve independent living.

Again I am reminded of my own experiences of my endeavour to travel independently. It took several years of trialling different setups and equipment. Thousands of dollars has been spent. I’ve ended up in some awkward situations, and failures have been plentiful. But with each failure, I had knowledge and experience that I took into the next stage. Each time I gained in confidence, and eventually I achieved my goal. Such that these days, I think nothing of going overseas and hiring a camper van. I wouldn’t have even dreamed that in my early 20s.

In the church, failure must be an option. Because this is where people grow, and I would suggest this is where people learn to lean on God’s grace, especially going by Paul’s experience (2 Corinthians 11:23-29, cf. 12:9-10). If we fear failure, is it because we are more concerned to see ministry programs succeed rather than seeing people grow? Take the chance, make the effort. If it falls short, learn, develop, grow, then go again!