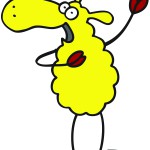 I was lost once. In a three-aisle supermarket.

I’d arrived there with my mum, and we must have parted company somewhere between the My Little Ponies and the chocolate.

In my defense, I was three or four years old at the time, and three aisles seemed more space than one child could EVER search to find one’s mother. I do believe I dissolved into a puddle of tears.

I’m reminded of the time I was lost in the supermarket when I read Luke 15; the story of the lost sheep. You know the story? The shepherd normally has 100 sheep, but one day finds that one of them is missing from the fold.

I wonder why Lambie was lost… (let’s assume that was poor lost sheepie’s name). Maybe Lambie was directionally challenged, and try as he might, he just couldn’t seem to find his way home. Perhaps Lambie was a teenager and thought it was time to assert some independence from his parents? Or maybe Lambie wandered off after spotting some My Little Ponies or some chocolate bars?

What does the word “lost” bring to mind for you? The tv show? The sheep? Something else?

Has a difficulty or a trial ever made you feel lost? Perhaps you’ve lost your home? Or lost a loved one?

And have you ever noticed the other ways that the word “lost” is used to mean disconnected, or not as something should be? Like “lost your mind,” “lost your marbles,” or just “lost it” with someone.

Whatever it is that we’ve lost in our lives, whether its losing our way, losing our focus, or losing our first love, it’s comforting to note that the bible story about Lambie in Luke 15 doesn’t focus so much on Lambie. Rather, the story assumes that lostness will happen. Not only is there the parable of the lost sheep, but the lost coin and the lost son too. It seems that people and things get lost all the time! Lucky for us, the focus of the story is on the shepherd, not the sheep.

And what a shepherd.

Just like my mother did, when noticing I was missing, came back to find and comfort me.

And suddenly, being lost seems a little bit more like being almost found.