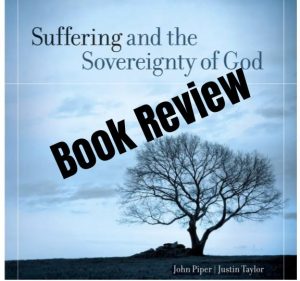 The tension between God’s goodness and sovereignty is well known to ministers and pastors, and it continues to be a challenge. John Piper and Justin Taylor are two such pastorally minded people who have stepped up to the challenge. They, along with other contributors, have provided a guide for thinking through the apparent contradiction between the goodness and sovereignty of God, and the reality of suffering.

In part 1, Piper’s contribution provides a defence of God’s sovereignty over Satan, persecution, life and death, natural disasters, sickness, along with other topics. For those still going through the emotions of suffering, or experiencing suffering at the present time, this chapter may come as a dose of “hard love”. However, acknowledging God’s sovereignty over all things is necessary if he is to be regarded as trustworthy. Mark Talbot follows on from this in his contribution by offering a critique of open theism. Open theism takes the view that God can’t prevent suffering because this would impinge on human freedom. Neither can God foreknow the future. However, such a position inhibits full trust in God because there is no certainty of his control, and neither is this consistent with the way the Bible presents God’s sovereignty. Instead, the Bible maintains the tension between God’s sovereignty and human agency by presenting God as sovereign and exercising control, and humanity as responsible and exercising choice. Those who approach this topic need to do so in the same way.

If God is sovereign over suffering, God must therefore have a purpose in suffering. This is the focus of part 2. Piper begins this discussion by discussing God’s purposes in relation to Christ’s suffering. He identifies the purpose of Christ’s suffering as the demonstration of God’s glory by grace and concludes that suffering exists for the revealing of grace. In this, Piper demonstrates that suffering is not futile or pointless – a point that we all need to draw encouragement from. However, a point of criticism should be made over Piper’s suspicion of self-sufficiency. No doubt, our dependency on God and his abundant blessings need greater recognition. Yet, this recognition of our dependency on God should not deny human agency. As bearers of God’s image, humanity is created to think, act and make decisions. This is not to be regarded as antithetical to God’s sovereignty. God’s purposes in suffering is illustrated by Stephan F. Saint who recounts the murder of his father by a violent tribe while serving on the mission field. The event has been made into a movie, “The End of the Spear”. Saint testifies to the good that has come out of this tragedy, and other tragedies in his life. This doesn’t mean suffering isn’t painful. But it does mean it’s not without purpose. At the same time, suffering should be challenged when it is socially constructed. Ellis discusses the impact that the Fall has had on human relationships and has resulted in power struggles. One of the ways this power struggle is exhibited is through racism, which Ellis discusses at length. He notes that, instead, the Christian life is to be characterised by faith and works as a response to grace.

If God is sovereign over suffering, and he has a purpose in it, how is suffering to be understood in relation to his grace? This is the issue addressed in part 3. David Powlison’s chapter is the first of three chapters that focus on God’s grace and the individual’s sufferings. Powlison understands suffering as God bring out what is most wrong in an individual to bring about what is most right. However, this hints at perfectionism as God “irons out the bugs” in believers. If this is the case, this underestimates the fundamental nature of sin and its severity. While there is a correlation between suffering and the production of character (Rom 5:1–11; 1 Pet 1:6–7), the biblical presentation of suffering involves much more than ironing out the bugs. In his contribution, Shramek considers our need to acknowledge suffering. This is contrary to our culture, and even church culture, that seeks to avoid or devalue suffering. However, we need to learn that pain and suffering matter. Pain and suffering have value. Shramek shows that far from devaluing suffering, the Bible portrays God as entering into our suffering, and this culminates in the person of Jesus. Joni Eareckson Tada’s contribution provides an emotional approach discussing the importance of hope in tragic circumstances. While she is indeed correct in what she says, her contribution could be regarded in some ways as contradictory to Shramek. Eareckson Tada’s treatment of tragedy may be perceived by some as dismissive, almost denying the aggrieved permission to express their pain. Yet, if it was right for God’s people in the Old Testament to cry out to God in anguish (Psalm 6; 13; 89:38–48; Habakuk 1:1¬–4), then it is appropriate for believers today to do the same and to be affirmed in that, as suggested by Shramek.

I can’t say I agree with everything that is said in this book, and some perspectives are more helpful than others. However, it does prompt the reader to think very seriously about their own suffering, the suffering of others, and how to respond. For this reason, I commend the book.