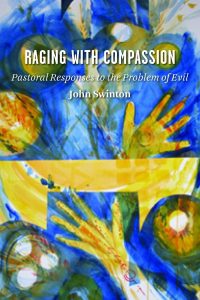 The existence of suffering and evil presents a challenge for understanding God’s goodness and sovereignty. A greater challenge for the church, still, is knowing how to respond to suffering. Especially when confronted by sickness and disabilities which impact individuals, and catastrophic events that impact communities.

In his book, Raging with Compassion, John Swinton begins to unravel key issues around the topic of theodicy – that is, how God’s sovereignty relates to suffering. He notes that in regards to theodicy, “standard philosophical and theological approaches to theodicy not only do not work, but can also be dangerous and have the potential to become sources of evil in and of themselves”.(1) Part of the reason for this is suffering is viewed “as a theological and philosophical problem to be solved and only secondarily as a human experience to be lived with”.(2) Swinton gives examples of how theodicy can cause more harm than good, such as explaining the death of a young girl as God’s way of spiritually renewing the members of the church.(3) Instead, Swinton provides a practical theodicy that enables the church to be the instrument of God’s grace when confronted with suffering and evil.

Swinton notes the concept of evil changes across times and cultures and is based on cultural and philosophical assumptions. He explains that due to influences from the Enlightenment and developments in science, in modern Western culture it is assumed that all problems can be solved.(4) “Evil and suffering are perceived first and foremost as a threat to our personal happiness and well-being”.(5) This is in contrast to the early church where suffering was common, and as such, the question was not “why do suffering and evil exist?”.(6) Rather, the question was, “how to respond to the existence of suffering and evil?”. The early church learned to live with suffering and evil by “building theodic communities”.(7) This meant responding to suffering in practical ways.

An important development in the book is the definition of evil. While all evil involves suffering, not all suffering is evil.(8) This is because Swinton defines evil as “not an entity, a ‘thing’ with substance and purpose”. Swinton understands evil as a “deprivation of the good”.(9) Specifically, evil is recognised as being “present in experiences of suffering, misery, and death that strip a person of the possibility of finding meaning and hope”.(10) Therefore, resistance to evil is considered in terms of being able to “retain a sense of “meaning, hope, and the possibility of God’s providential presence”.(11) The significance of this is it separates the notion of evil (the deprivation of good) from the experience of suffering. So, in the instance of disability, the issue for ministry may not be the disability itself, but the deprivation of good that often accompanies disability – fellowship, participation, access to God’s word, etc.

Another key aspect to responding to suffering that Swinton addresses is the practice of Lament. Swinton notes that suffering often has no place in the thinking of Christians. It is often assumed that negativity should not be part of the life of faith.(12) Instead, there is a tendency to sideline suffering and carry on as normal.(13) However, the practice of Lament validates the sufferer’s experience, and enables them to incorporate their sufferings into their relationship with God. In turn, the sufferer can understand their experience in a way that differs from cultural norms. As such, lament is more about restoring relationships than providing answers.(14) This too can provide a powerful resistance to evil.

The definition of evil being defined as the deprivation of good also has significance for those who commit evil. Swinton states, “there is no category of “evil persons’”.(15) The significance of this is to recognise that all people are capable of committing grievously evil acts. Although, in the New Testament, evil does assume an entity (Matt 13:47–50 being the clearest example). Jesus declares those of his generation to be evil (7:11; 12:34, 35, 39; 16:4), Paul recognises the existence of evil people (2 Thess 3:2; 2 Tim 3:13) and evil spirits are regarded as an entity that can possess people (Luke 7:21; 8:2). Nonetheless, the definition that evil is given provides a helpful framework for responding to those who do evil. If someone does evil, this should not define their whole being. To do so would make them less than human. Understanding the evil act in the greater context of their being allows for their restoration and forgiveness.

Finally, Swinton puts forward hospitality as the means for people to experience recognition to God and to others. It is through hospitality and welcoming those who are different from ourselves that evil is resisted.

The significance of the book is it exposes many of the presuppositions that exist around suffering and evil. It provides a practical definition of evil and identifies ways that the church can powerfully resist evil by providing restoration to those who suffer. It also provides a helpful way of perceiving those who commit evil, and a way forward for forgiveness. For anyone looking to go into pastoral ministry, this is a book that must be read.