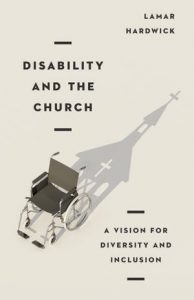 In his book Disability and the Church: A Vision for Diversity and Inclusion, Lamar Hardwick discusses the need for churches to be more inclusive of people with disabilities. Throughout the book, there are plenty of profound insights in the short and to-the-point chapters. However, his interpretation of key Bible passages is concerning.

Hardwick is a church minister at Tri-Cities Church in East Point, Georgia (U.S.) who has struggled with social awareness and skills all his life. This has had an impact on his ministry which he made a habit of denying. At age 36, he was diagnosed as having Asperger’s syndrome. Since then, he has been able to put techniques and structures in place to manage the social challenges he faces. He has also become an advocate for churches to become disability inclusive with a particular focus on children with autism.

Hardwick offers insights that really should inform any ministry, but particularly ministry to people with disabilities. Hardwick perceives that being in relationship with God is important for a person’s well-being. This relationship will have a variety of expressions, and therefore, the church should be looking for those who are vulnerable to being left behind on the basis of the Parable of the Lost Sheep (Matt 18:10–14; [Luke 15:4–7]). This is reinforced by Hardwick’s exposition of the Parable of the Great Banquet (Luke 14:12–24). Here, the argument is made that a lack of inclusion is seldom about money. Rather, a lack of inclusion is often driven by an unwillingness to ensure full access to the church and full participation in its life, having people with disabilities present in the church and to have their stories heard. Instead, the church can often become a reflection of cultural norms that exclude people with disabilities in the first place. Hardwick makes the key observation that one of the cultural norms is the avoidance of suffering. However, the priority for the church should be the honouring of God. So, the emphasis should be on hearing people’s story, recognising them as a bearer of God’s image and enabling them to honour God within their story. Hardwick also gives consideration to the place of the body in the new creation, and argues, quite convincingly, that there may be a continuation of the remnants of disability. Often, the conception of our heavenly existence is merely a projection of our cultural ideals. Such conceptions of heaven can conceal prejudices against people with disabilities. However, nowhere in the New Testament are believers promised a new body. Instead, they are promised a renewed body which suggests a continuation of our present existence in some form.

Hardwick then discusses techniques for the church to embrace this diversity, and how the church can build a better Christian culture. However, this is where his interpretation of the Bible is a concern. His basis for building a better culture is the Parable of the Seeds (Matt 13:18–23) and observes that the seed is not responsible for producing fruit. The right environment is required for the seed to grow. From this, Hardwick explores ways of how the church can create environments to ensure that people grow as believers with a particular focus on those with disabilities. The insights that Hardwick makes are incredibly profound and helpful. The only difficulty is, the point of the parable was not how to create an environment where believers can grow. If this was the point, then Jesus failed to adhere to his own lesson as only a very few grew in their faith in him. Rather, the point of the parable is to explain why Jesus speaks in parables (v. 10). Jesus’ ministry is compared to Isaiah’s where, essentially, he was preparing God’s people for judgement (vv. 14–15). Jesus’ ministry exposes people’s different preoccupations that inform the way they respond to him. Unfortunately, this is overlooked by Hardwick.

Another difficulty is Hardwick’s reading of Paul. Like many who write in the field of disability and theology, Hardwick sees Paul as having a disability. While this is possible, such readings are, at best, speculative. Little doubt, Paul experience ailments. However, to say Paul’s life experience was comparable to people with disabilities today is simply to read too much into the text.

Hardwick’s book offers a lot of profound insights for including people with disabilities into the life of the church. For this reason, it has value for developing more inclusive ministry. However, the reader needs to be wary of his interpretation of the Bible.

Find out more about Rev. Jason Forbes and his Disability Advocacy work by following his Facebook Page.